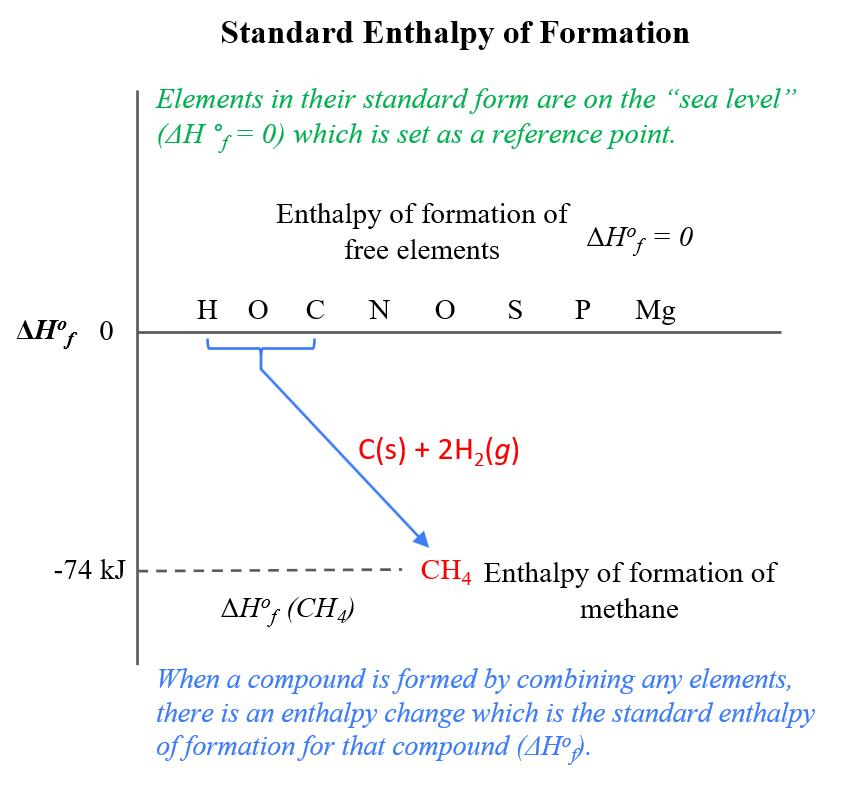 Standard enthalpy of formation (or heat of formation), ΔHof , is the enthalpy change when 1 mol of the substance is formed from its constituent elements in their standard states.

For example, the formation of 1 mol ammonia from H2 and N2 gases releases 46.0 kJ heat:

Let’s answer one question before moving on.

Well, the problem is it is impossible to measure the absolute value of the enthalpy of a substance. So, what we do, is take a reference point like the sea level for the height of mountains, and measure the enthalpy change when a given compound or a substance is formed from its elements.

This reference point is the standard enthalpy of formation of any element in its most stable form which is set to zero.

For example, the standard enthalpy of formation for O2 is zero, and that of Na, C (graphite), Br2, etc. is zero.

Why did we mention graphite for carbon? Remember, carbon has a few allotropes, and the most common ones are graphite and diamond. Graphite is the most stable (standard state) of carbon and therefore, its enthalpy of formation is zero (), while that of diamond is not. Diamond is less stable and its conversion to graphite is an exothermic (downhill – thermodynamically favorable) process:

Fortunately, this process does not happen overnight, and we get to keep our diamonds.

For example, the standard enthalpy of formation for methane from carbon, and hydrogen is -74.6 kJ/mol:

The comprehensive list of the heat of formation can be found in your textbook or by a quick google search.

How do We use the Enthalpies of Formation?

There are countless reactions that can be carried out and it is not always that we can or need to measure their enthalpy change. However, by having a library of values for the enthalpies of formations, we can determine the enthalpy of a given reaction. There are two approaches to doing this.

If the enthalpies of formations for all the components of ac chemical reaction are known, then the following formula is used to determine the enthalpy of this reaction:

We will discuss this approach in the next post called “Enthalpy of Reaction from Enthalpies of Formation”.

If the enthalpies of formation of all the components in chemical reactions are not known, then Hess’s law is used. You can go to the link for detailed coverage of the Hess’s law, but let’s use it here to address one more question you may be wondering about:

How is Enthalpy of Formation Measured?

When we say the “reaction” forming a substance from its constituent elements, it is, very often, a hypothetical reaction. We can’t combine carbon and hydrogen in the laboratory to make methane. So, to determine its enthalpy of formation, we measure the enthalpy of the combustion reaction of methane using bomb calorimetry and then, apply the Hess’s law to obtain the ΔH °f of methane.

The combustion reaction of methane is the sum of three reactions of formations of methane, CO2, and H2O:

Notice that there is a negatice sign in from of ΔH °f (CH4) becasue the reaction is reversed.

Using the standard heats of formation given below, calculate the heat of reaction for the combustion of ammonia:

Combustion of butane (C4H10) releases 5755 kJ of energy according to the following chemical equation.

Calculate the molar enthalpy of formation of butane using the information given below:

Zinc is recovered from ZnS by first oxidizing it to ZnO. Calculate the enthalpy of this oxidation reaction using the data given below:

Using the standard heats of formation given below, calculate the heat of reaction between barium carbonate (BaCO3) and sulfuric acid (H2SO4).