Significant figures are important in measurements and calculations, and you are going to see them quite often in chemistry. If you have already seen them, there is a chance that you feel slightly lost on getting the point of using them in every calculation. In this article, we will try to clear this confusion. So, first, what are the significant figures?

Let’s say you are using a ruler to measure the length of a calculator. Suppose the tip of the calculator stops between 13.4 and 13.5 cm: 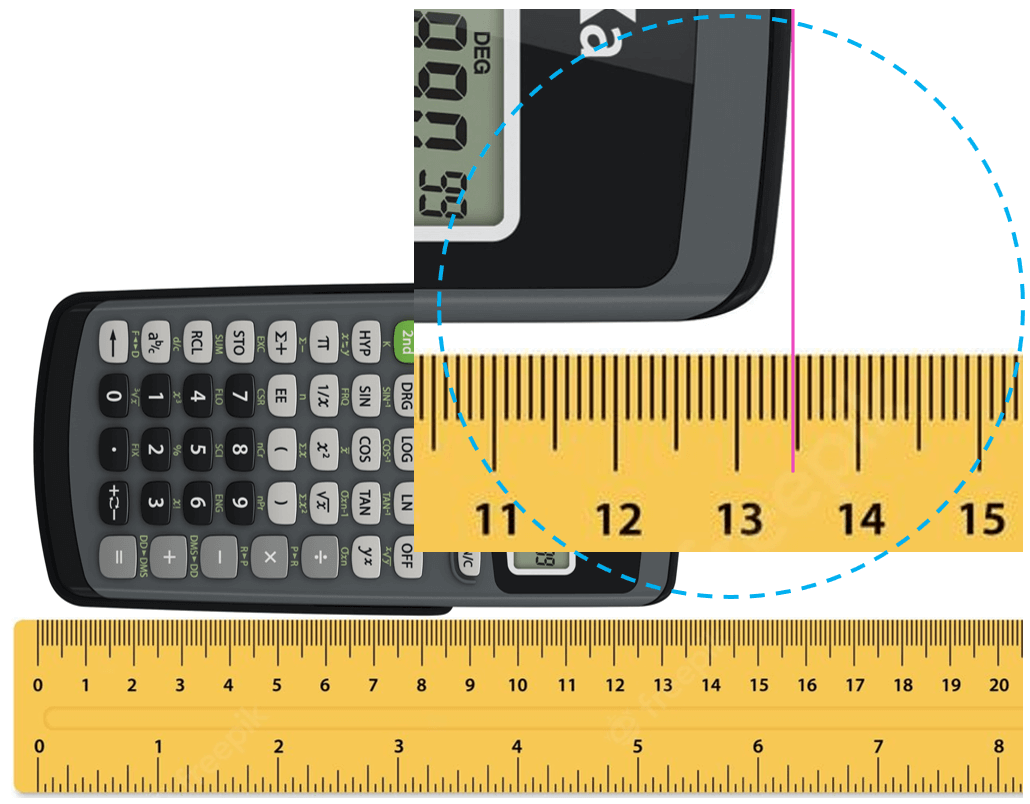 The question is how we know what the length is if the increment of the ruler is 0.1 cm (1 mm). Is it 13.48, 13.46, or maybe 13.45? And the answer is we cannot know this for sure because the precision of the measurement is limited by the ruler. What we do is estimate the last digit which can be for example by taking the average of 10 people who look at the reading of the ruler. The accepted approach here is to put all the numbers that are certain (in this case 13.4 – these are called certain digits), and one that is estimated (estimated number).

Let’s say we agree that it is 13.47 cm. All these numbers together, that is the certain digits and one estimated digit, make the significant figures of the measurement or simply significant numbers. 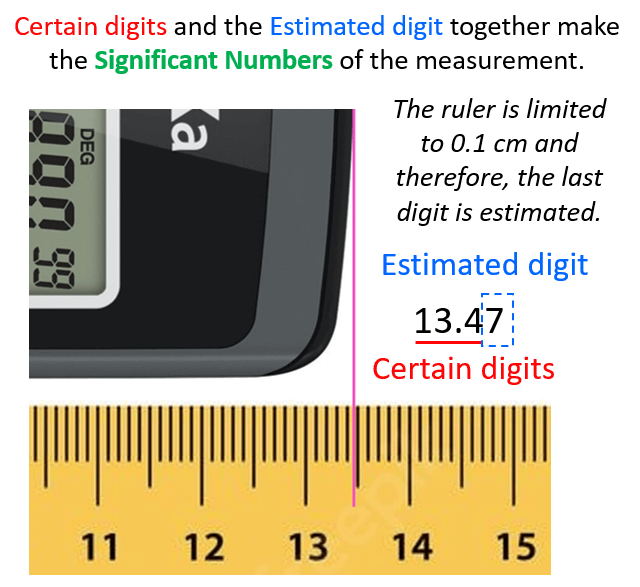 Notice that the answer is more precise than 13.47 because it has 3 decimal places which indicates more significant figures in this case. And this is not an accurate way of reporting the answer because we started with a number that only had 2 decimal places and we cannot have an answer that is more certain than any of the initial measurements. Therefore, there are rules that we must follow when doing mathematical operations in order to report the answer in a correct number of significant figures. So, remember, when doing calculations, we cannot suddenly have an answer that is more certain than the starting numbers because the calculation is based on those initial measurements. Before going over the rules for mathematical operations, let’s first address an important question:

How do I Identify the Significant Figures in a Number?

It is the zeros that can be either significant or nonsignificant depending on where in the number they are located. First, let’s address the ones that are in between nonzero numbers. These are called interior zeroes and are considered significant figures. For example, 6204 has 4 S.F., 84069 has 5 S.F., and 204 has 3 S.F.

If the zeros are at the end of the number (trailing zeroes), they are considered nonsignificant, unless there is a decimal place! 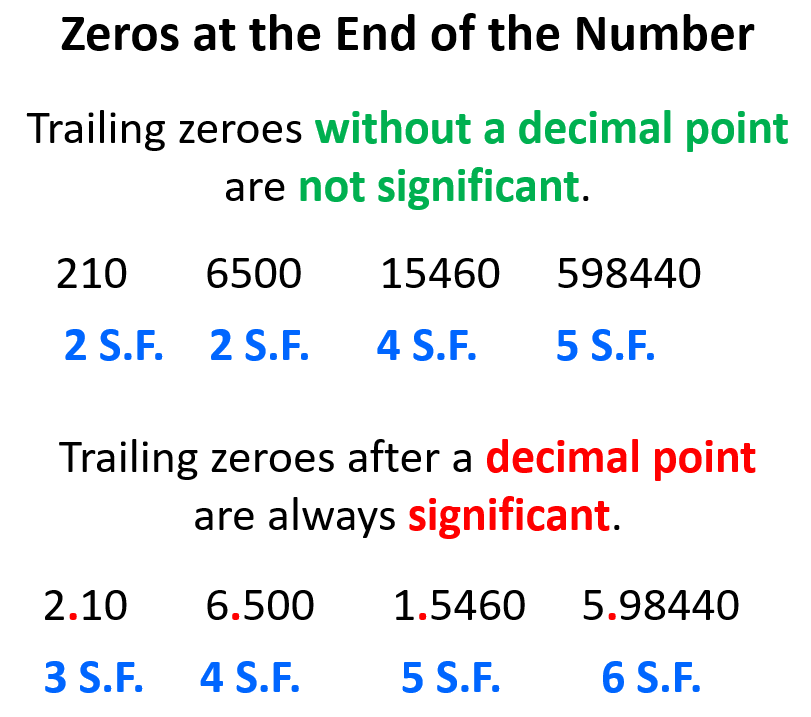 If the trailing zero appears before the decimal point with following zeroes, then this zero is also a significant number:

The same goes for zeros that stand before the first nonzero digit (leading zeroes). These again only tell us how small the number is and not how accurate the measurement was.

Notice that the zero between 5 and 8 is significant, and so is the one at the end of the last number because there is a decimal place. In any case, the zeros before the first nonzero digit are not significant.

We often work with extremely large or small numbers in chemistry which can be written or understood wrongly if one zero is misplaced. To avoid these mistakes and represented the numbers easier, the scientific notation is used which has a general form of N × 10n

N here is a number between 1 and 10 and n is the exponent that can be a positive or negative integer (whole number).

For counting the number of significant figures in scientific notation, we focus on the N, that is the number that comes before the 10n. The exponent is only to tell us about the magnitude of the number.

On the other hand, if the number has more digits than it is supposed to have, the initial number is rounded off according to how many significant figures there should be. For example, how can we express 46897 in two significant figures?

These are the numbers that do not have any uncertainty and therefore, they do not limit the number of significant figures.

This is important when doing calculations, as you need to remember that the number of significant figures in the answer is dictated by the other number and not the one given with exact numbers. We will discuss the significant figures and mathematical operations in the next article as this has been quite a lot of information already.

How many significant figures are in each number?

Round off the following numbers as indicated.

b) 26547 to 4 significant figures in scientific notation

Which numbers are exact indicating they have an unlimited number of significant figures?

a) MPG of the car showing as 28 miles per gallon

c) A bag of potatoes labeled as 3 lb

d) A class with 26 students