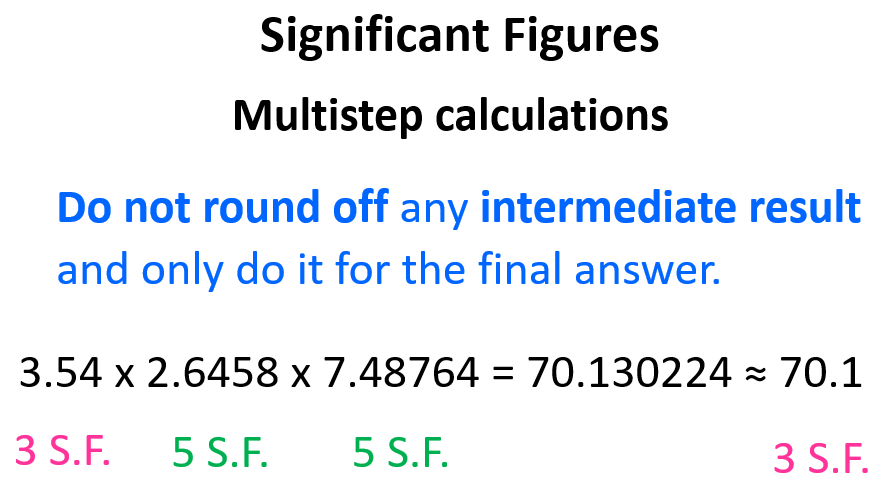 In the previous post, we talked about significant figures, the ways of counting them, and their importance in the certainty of measurements. Significant figures of a measured number also dictate the certainty of the answer obtained by mathematical operations such as addition, subtraction, multiplication, and division. The idea behind this is that we cannot have an answer that is more certain than the starting numbers because the calculations are based on those initial measurements with their certainty. Therefore, there are rules we need to be familiar with when doing calculations involving measured numbers. There are two main rules applied to addition and subtraction and multiplication and division respectively. 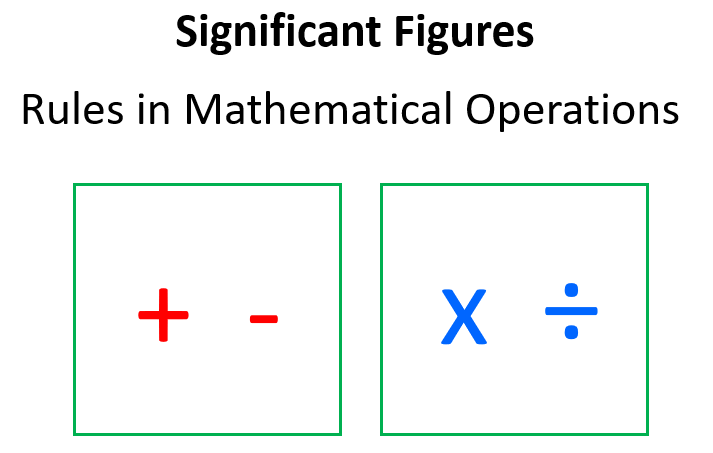 Significant Figures in Multiplication and Division 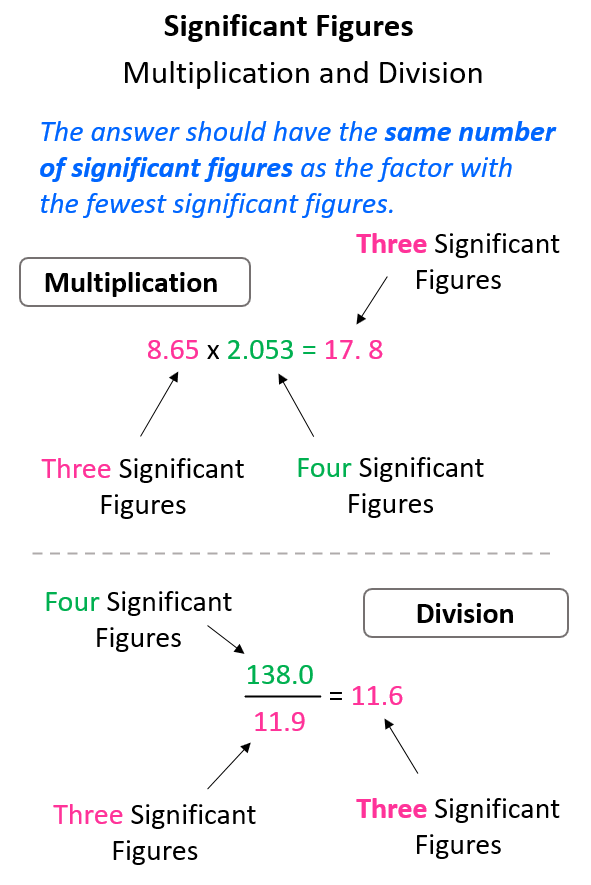 If you checked the calculation with a calculator, you would see that the answers have more digits and this is where we are limited to not having as many numbers as we see. Recall the rules for rounding off to the correct number of significant figures. The number is rounded down if the one to the left is four or less, and we round up if the digit on the left is five or more.

For example, in the multiplication above the exact answer is 17.75845, however, we round it to 3 significant figures according to the number 8.65. This means the 7 needs to be rounded up because of the 5 next to it: 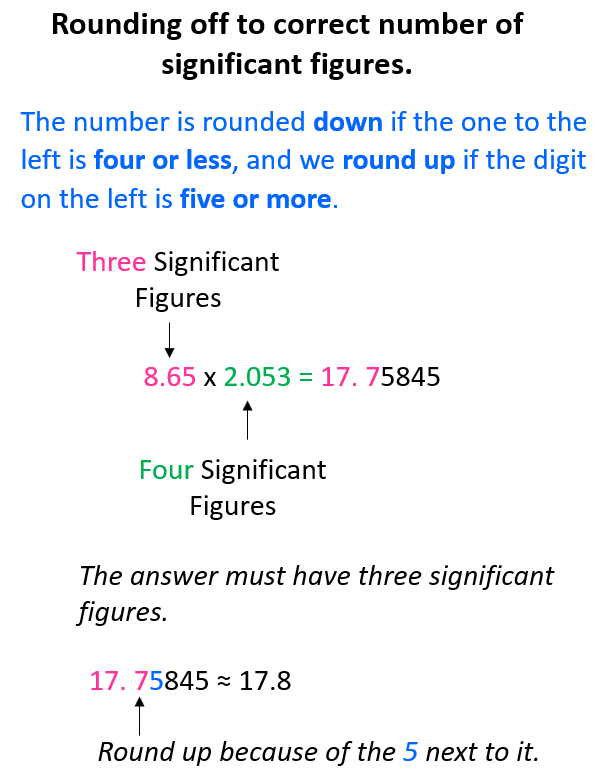 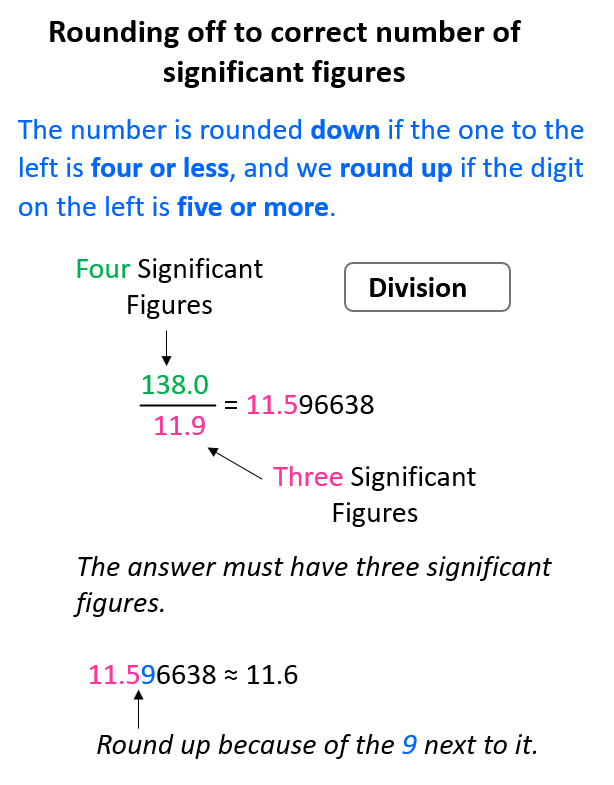 Significant Figures in Addition and Subtraction

When doing addition or subtraction, the answer carries the same number of decimal places as

the number with the fewest decimal places. Don’t forget to apply the same rules for rounding off as well. 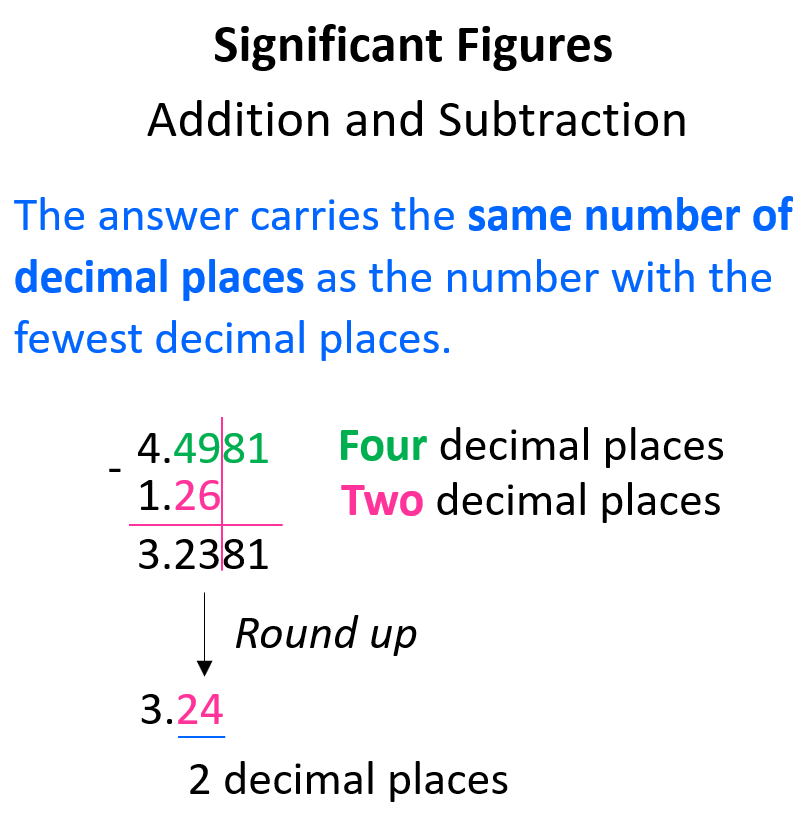 Now, here is an interesting question:

What if one or all the numbers do not have decimal places?

How do we determine the correct number of significant figures in an addition or subtraction when there is no decimal place?

For example, what is the answer to 23 – 14.6? 23 does not have a decimal place, which means the 3 is the last significant figure, and all the digits after it should be dropped following the rules for rounding off.

The calculator gives 8.4, however, we round it to 8 with no decimal place because the number with the least number of decimal places (23) has none.

You can still do this by drawing a line like we did for numbers with decimal places. In this case, the line stops at the 1 because it is the last significant figure:

In other words, we can say that we rounded the answer to the ones place because 23 has the certainty of ones which is less than tenths (8.4).

Drawing a line is still a good approach to follow this. Just make sure to place the numbers in correct positions (thousands, hundreds, tens etc.). 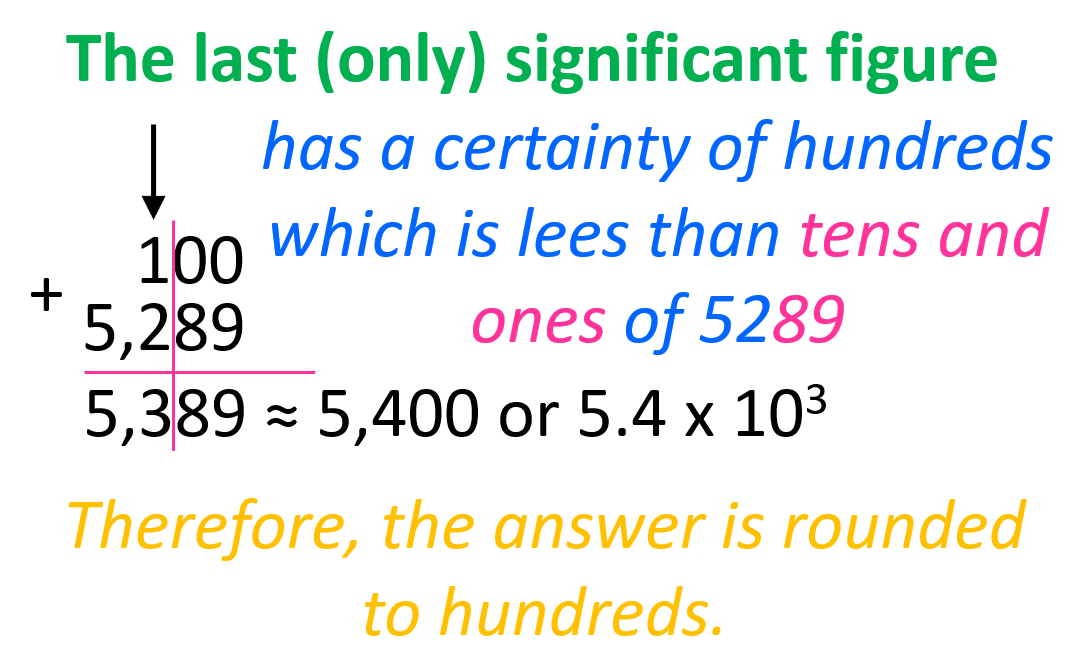 If there are more than two numbers involved in the calculation, the rule is to not round off any intermediate result and only do it for the final answer.

The calculation involves only multiplication and therefore, we keep all the digits for the intermediate numbers and round off the final answer according to the number with the fewest number of significant figures.

The same would be true if there was a division in the calculation. For example,

The answer has 2 significant figures based on the number 2.1.

Let’s now discuss the significant figures when the calculation involves both subtraction division and addition subtraction. Although the same principle of rounding off only at the very end is applicable, there are some nuances we need to consider.

For example, the following calculation involves multiplication and subtraction.

Now, the first thing is to follow the correct order of operations. Remember, the one in the parenthesis must be done before the result is multiplied by the other number. So, in this case, we first subtract 2.34 from 6.2594. The result is 3.9194 and if it was the final answer, we’d round it off to 3.92 because 2.34 has only two decimal places. 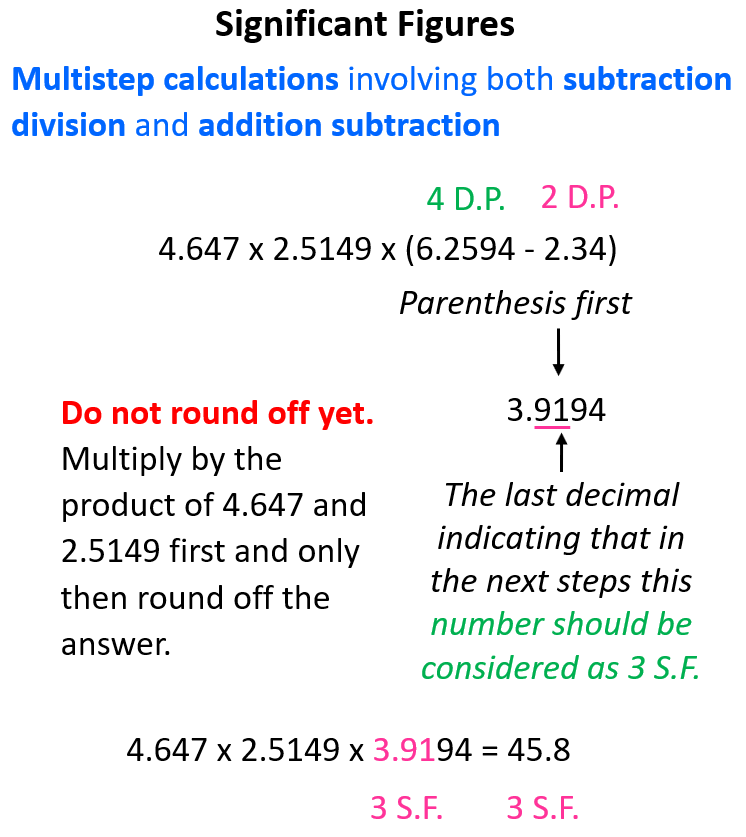 Let’s do one more example of a calculation involving addition/subtraction and multiplication/division.

Calculate the answer of this calculation expressed in correct number of significant figures:

In this case, it does not matter if we do the operation in the numerator or denominator first. Let’s do the subtraction and see how many significant figures is the result going to have when we divide the product in the denominator. 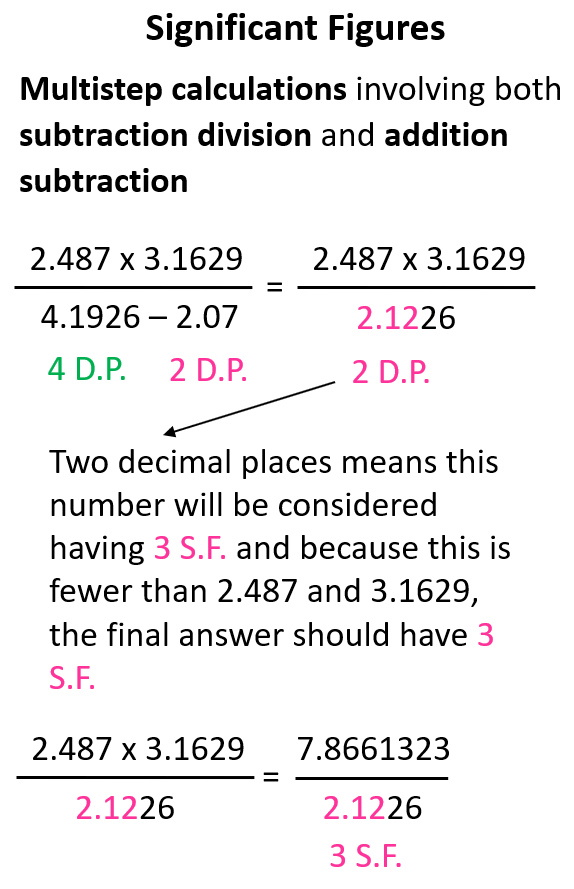 Let’s quickly recap what scientific notation is and why we use it. We often work with extremely large or small numbers in chemistry which can be written or understood wrongly if one zero is misplaced. To avoid these mistakes and represented the numbers easier, the scientific notation is used which has a general form of N × 10n

N here is a number between 1 and 10 and n is the exponent that can be a positive or negative integer (whole number).

For counting the number of significant figures in scientific notation, we focus on the N, which is the number that comes before the 10n. The exponent is only to tell us about the magnitude of the number.

On the other hand, if the number has more digits than it is supposed to have, the initial number is rounded off according to how many significant figures there should be. For example, how can we express 46897 in two significant figures?

Scientific Notation in Addition and Elimination

The good news about this problem is that the exponents on the 10s are the same which means we can just add the numbers in front of the powers of ten and put the exponent next to the answer:

Notice that we rounded the result to one decimal place as we learned for the addition and subtraction.

If you are confused about how we can add the numbers, think of this as an expression

We can rewrite it by putting the numbers in parenthesis and the X outside of them:

So, X and 103 are identical factors here, therefore, we can also write:

Round the decimals to the ones place and add the correct exponent according to the magnitude of the number:

We can still draw the line after the last significant figure to make this more visual: 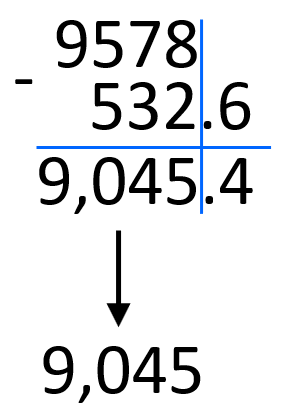 Another approach is to match the exponents by changing one of the numbers in front of the 10s.

We decrease 8.46 ten times by moving the decimal to the left and to balance this, the exponent is increased by one. After this, we can subtract the numbers and add the 102: 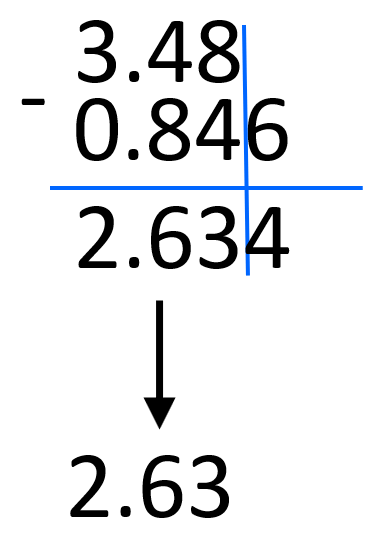 Scientific Notation in Multiplication and Division

The numbers in front of the 10s are multiplied and divided accordingly. 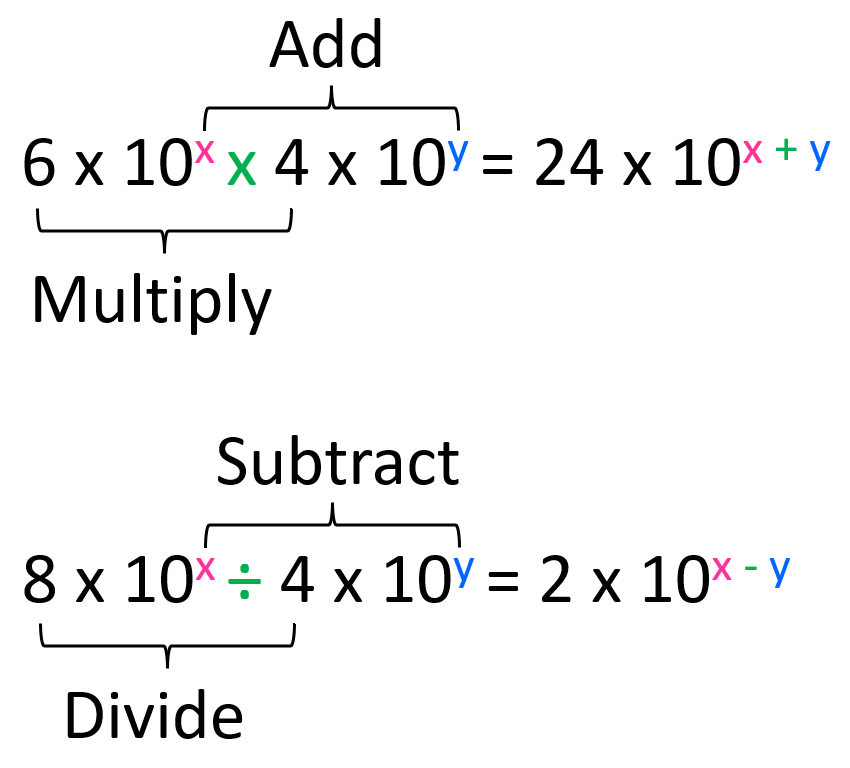 For example, what is the answer to this calculation expressed in scientific notation?

Perform the following calculations and report the answers in the correct number of significant figures. 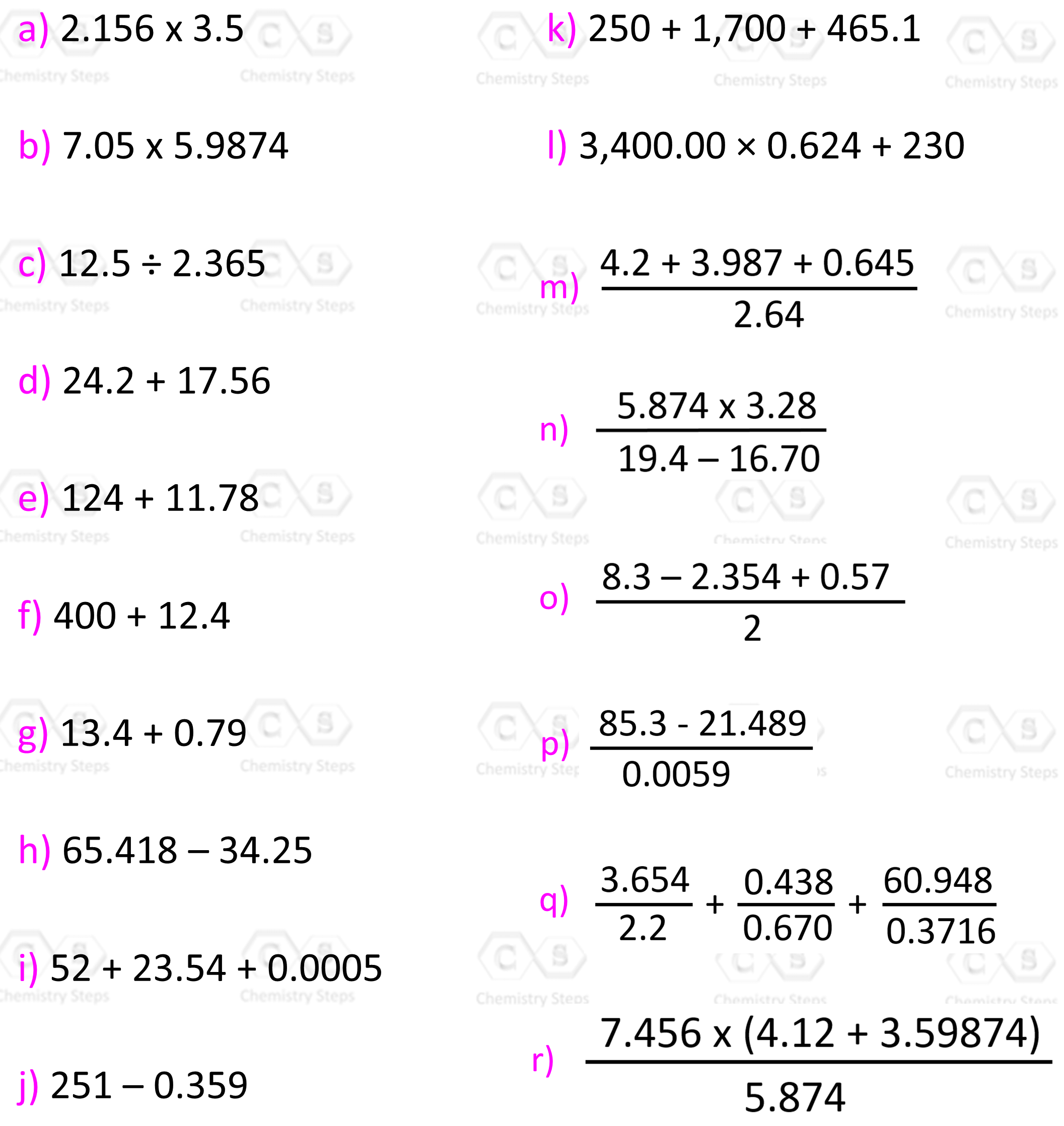