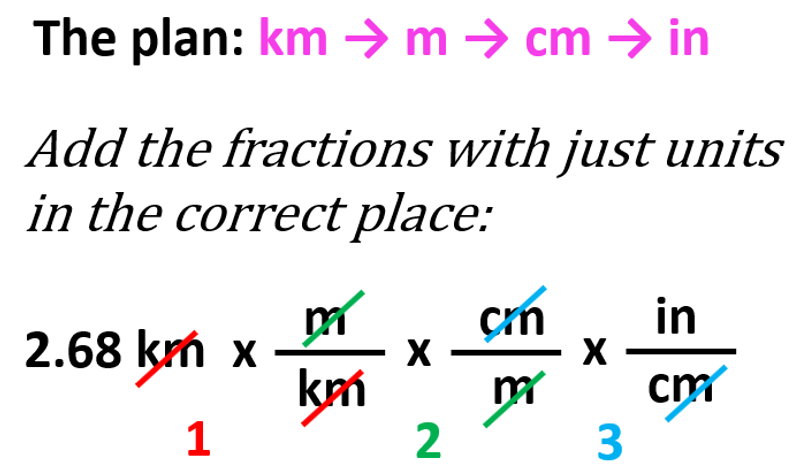 All the measurements such as quantity, length, and volume are given with a number and a unit. For example, 2.5 lb, 35 miles, 15 gallons and etc. Now, these units are familiar to you if you live in a country that uses the English system, but they may not be as evident for someone who is in a country where the metric system is used. Kilogram, centimeter, and Celsius which are the measuring units there are probably just as foreign to you.

This issue of having inconsistent units spread to scientists too as they were not able to communicate their data accurately across research groups in different countries and therefore, the International System of Units (SI), was set to be the standard for communication. It is based on the metric system, and in today’s article, we will learn some strategies for converting different units including the metric ones.

So, what is a conversion factor?

These are essentially the ratios of the units for the given quantity.

For example, we know that 1 ft is 12 in, and therefore, we can derive two conversion factors by simply getting the ratio of these units: 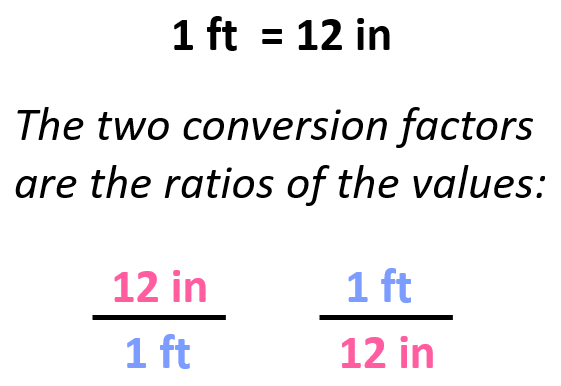 Once we have the conversion factor, we can convert a quantity given in one unit into an equivalent quantity with a different unit by multiplying it with the correct factor.

Let’s say we need to calculate how many inches 4.58 ft is.

The first step is to write the conversion factors, and we have already got for the ft-in relationship:

All we need to do at this point is multiply the initial number with the conversion factor:

Summarizing what we did, we can write the steps as follows: 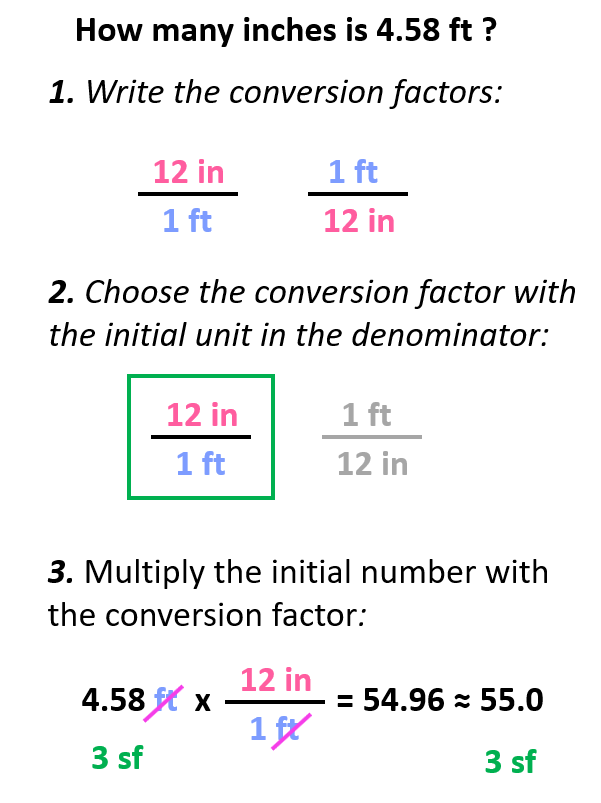 Below are some of the common conversion factors for the length that you are going to need in a general chemistry class: 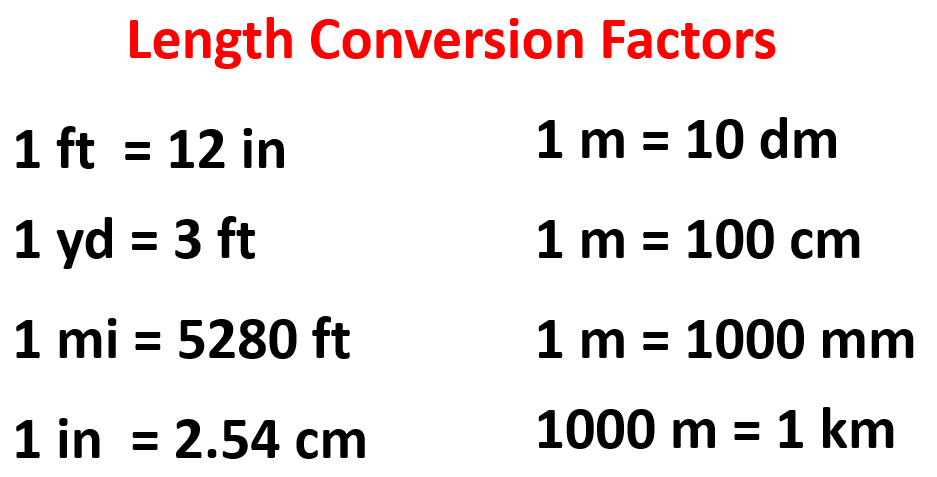 First, we find that 1 mi is 5280 ft, and therefore, the conversion factors are:

Out of these, we need to pick the second one since it has the mi in the denominator, and we can cancel them with the initial data:

Sometimes, you may not be given a conversion factor between two units. For example, how many inches is 2.68 km?

A great thing about dimensional analysis is that we can combine all the steps in one operation by simply adding the correct conversion factors one by one.

You can first write the initial number with the unit, and add a fraction with just units in the correct place:

And once we know which units go to the denominator, we can write the correct conversion factors from the table:

The plan here would be going from km to m, and m to yd.

Keep in mind that there might be several ways of going about the same conversion depending on what factors we have. For example, if we did not have the m-yd conversion, we could go km → m → cm → in → ft → yd based on the data we have in the table.

There is no difference in what units you are converting – dimensional analysis is always based on the same strategy.

Here are some conversion numbers for mass units that we can use to pick suitable factors: 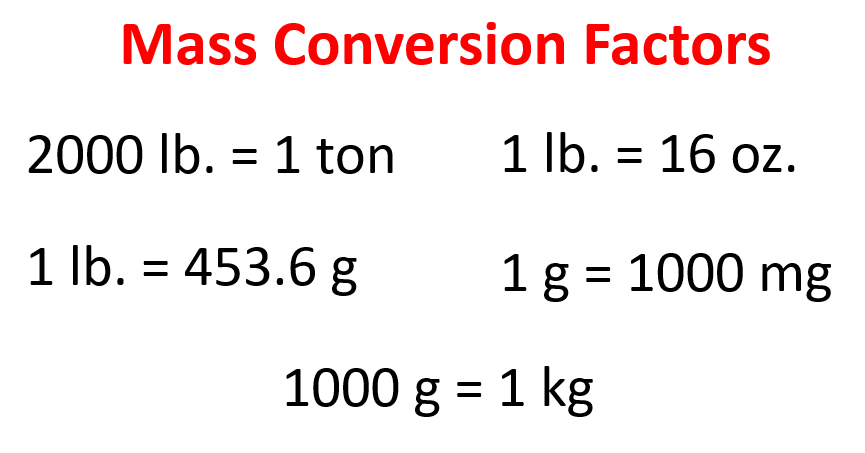 Unlike the mass and the length, there are two types of units for the volume. In one of them, the volume is given in a simple unit such as L, mL, or gallon, which already presume a volume, and the other is when the volume is given cubes. This, in general, is referred to units raised to a power, and for volume, it is the cube.

Let’s do an example with a simple volume unit conversion first.

Using the conversion factors given below, calculate the volume of 5.26 L water in gallons. 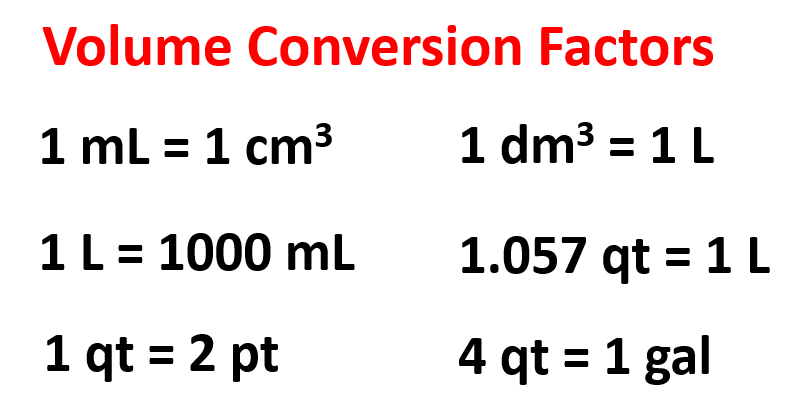 To find the correct conversion factors, first look for a unit that is correlated to liters. In this table, it is the qt which is then linked to gallons. Therefore, we can write a two-step conversion using dimensional analysis:

The most important thing you need to remember here is to raise both the number and unit to the given power. For example, if 1 in = 2.54 cm, then 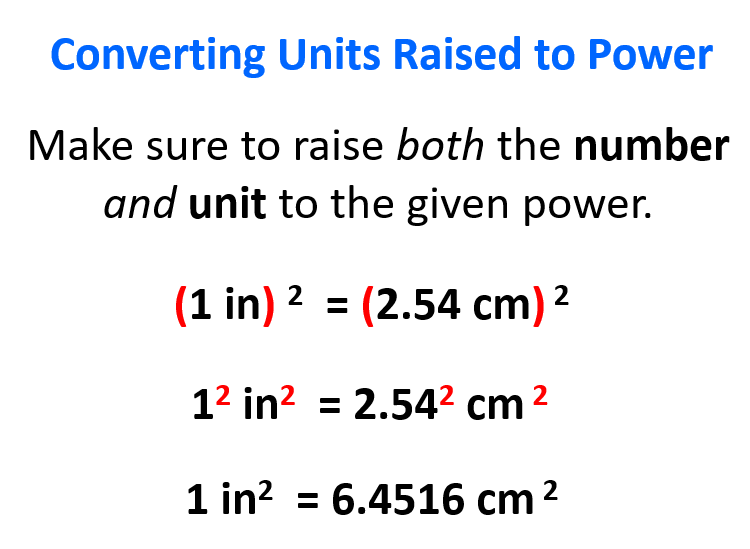 Do not confuse this when the problem says, for example, how many cm2 is 15 in2. You do not want to square 15 because that number whatever it was is already squared and it is the final number with the squared unit. So, to find this in cm2, we write:

We can first calculate the volume in in3 by multiplying the sides and the thickness:

Next, we use dimensional analysis to convert in3 to cm3:

A good example of measurements with two units is the speed which is described by the ratio of distance over time. For example, 75 mi/h means the vehicle goes 75 mi per hour. So, let’s say we are asked to express this speed in m/s.

This may look confusing at first, but don’t worry – we are going to follow exactly what we have been doing for converting one unit. The only difference is that we repeat the process for the two units as if we are converting separate units. It does not matter which you nit you start with, so we can go with the miles. The conversion plan for miles to meters would be mi → km → m, and therefore we can write the first part as: 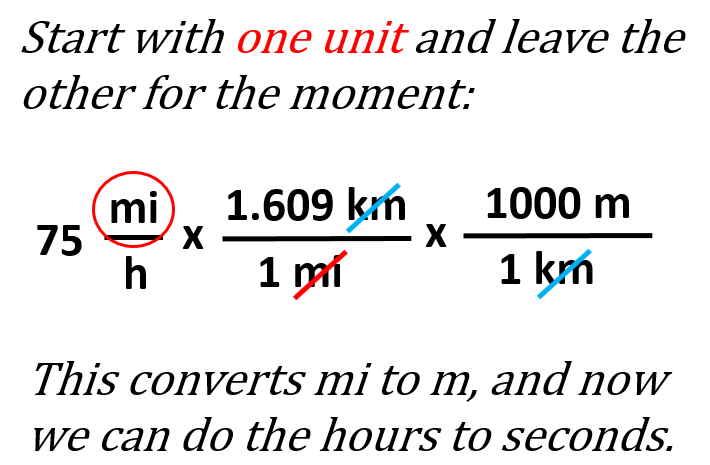 This part converts the miles to meters and next, we do the same for the hours-seconds by simply adding the conversion factors:

So, the first part gets us to meters, and the second part converts the hours to seconds. Notice that because the hour is in the denominator, place it at the top and the minute at the bottom for the first conversion factor.

Perform each of the following conversions.

Units Raised to a Power

Perform each of the following conversions.

8) Perform each of the following conversions.

The world record for 100-m dash is 8.58 s. Calculate the average speed of the athlete in mi/h.

Ho many liters of soda will be needed for 50 guests if each of them drinks 10. fl. oz. of soda?

Would a car traveling at a constant speed of 62 km/h violate a 40 mi/h speed limit?

A sample containing 31.25 g of metal pellets is poured into a graduated cylinder initially containing 11.9 mL of water, causing the water level in the cylinder to rise to 18.7 mL. Calculate the density of the metal.

Complete the missing data for the density, mass, and volume in the following table:

How many kilograms of honey with a density of 1.40 kg/L are there in a gallon container?