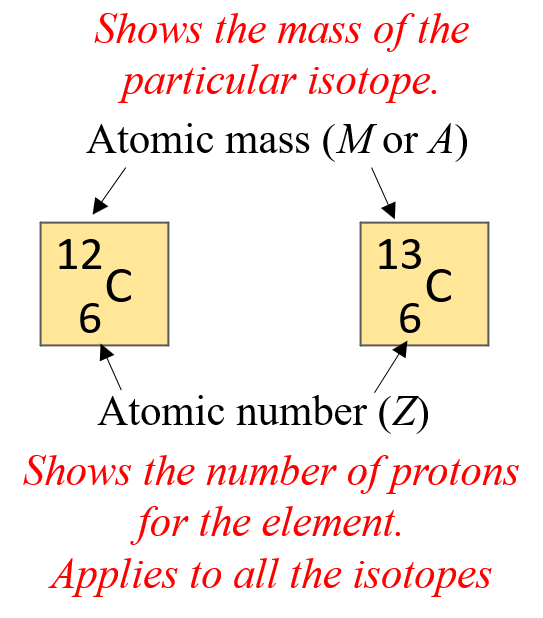 For example, there are two common isotopes of carbon: carbon-12 and carbon-13. In the periodic table, or in general, their notation will look like this:

Most often, in the periodic table, you will see a number with decimals instead of a whole number. This is the average atomic mass, which is the average mass of all the isotopes for that element, For example:

So, the top number in this case is the atomic number and the one on the bottom is the average atomic mass K, which is calculated by the weighted average of all the isotopes. That is, the mass of each isotope is multiplied by the percent fraction of its abundance.

Second, remember, that atomic mass is the sum of the number of protons and neutrons. So, if we have one, we can calculate the other.

For example, how many protons does the 37Cl isotope of chlorine have?

What you need to first, is look up the atomic number of Cl. It is 17, so chlorine has 17 protons. Now, to find the number of neutrons, we subtract this number from the atomic mass which is given in the top left corner of the symbol:

To illustrate this, let’s look at a more descriptive representation of the two carbon isotopes:

Recall, this pattern for the formation of anions and cations:

When working on problems calculating the number of protons, neutrons, and electrons. We are going to need the atomic mass of the specific isotope.

For example, write the symbol of the atom with 15 protons and 16 neutrons.

First, we need a periodic table to look up the element with atomic number 16 which we find is phosphorous, P. Next, we need to find the atomic mass by adding the number of protons and neutrons together:

And now we can write the symbol by placing the atomic mass in top left, and the atomic number in the bottom left side of the element:

You may also be asked to write the atomic symbol based on the number of neutrons.

For example, write the atomic symbol of the element that has a mass number of 107 and 60 neutrons.

Next, we look up the element with the atomic number 47 which is Ag. The atomic symbol for this isotope would be:

In the next article, we will work on examples of collating the number of protons, neutrons, and electrons for atoms and ions given different data.