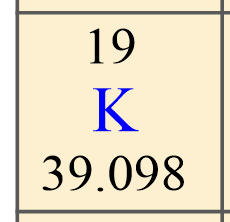 How To Calculate The Number of Protons, Neutrons, and Electrons

Before we start with some examples of calculating the number of protons, neutrons, and electrons, let’s recall what information we get about a particular element from the periodic table. For example, if we look up potassium, K in the periodic table, we will see the following numbers:

The first, you want to identify is the atomic number of the element because this is unique for each element. This is the number usually given on the top of the symbol, and, in this case, it is 19.

So, potassium has 19 protons, and this is true for all its isotopes. There cannot be another element with the atomic number 19.

If you are given data stating that the atomic mass of potassium is, for example, 39, then this is referred to that specific isotope.

Determining the Number of Protons

In an easy example, you may be asked to simply determine the number of protons for the given element.

For example, how many protons does Ca have?

For this, you just need to look up the atomic number of Ca, which we find, from the periodic table, that it is 20. Therefore, Ca has 20 protons.

Do not get confused if the element is given with some other data such as the atomic mass or the average atomic mass.

For example, how many protons does the following isotope of palladium have?

Again, we don’t care what isotope it is, what mass, and how many neutrons it has. Pd is always going to have 46 protons as the atomic number is the identity of the element.

Number of Protons from Neutrons

Suppose you are not given a periodic table, and the questions asks to determine the number of protons from the number of neutrons. In this case, the mass number must be given.

For example, how many protons does the element with a mass number 35 if it has 18 neutrons?

The Number of Protons from Electrons

For example, identify the element of an atom with 54 electrons.

All we need to do is look up the element with the atomic number 54, and that is Xe.

The Number of Protons in Ions

Recall, this pattern for the formation of anions and cations:

For example, what element has a charge of 3+ with 10 electrons?

Calculating the Number of Neutrons

For example, how many neutrons does the 65Cu isotope have?

For example, how many neutrons does an atom with a mass of 79 and 35 electrons have?

Having 35 electrons means it also has 35 protons, and if we subtract this from the atomic mass, we will know how many neutrons it has.

The Number of Neutrons in Ions

For example, how many neutrons are there in an ion with a mass number of 127 and 54 electrons that has a charge of -1?

To summarize, you need to remember these relationships between the atomic mass, the number of protons, neutrons, and electrons:

Which atom has the smallest number of protons?

answer
The answers and solutions to practice problems are available to registered users only. Click here to Register!
Forgot Password
2.

Which atom has the largest number of protons?

answer
The answers and solutions to practice problems are available to registered users only. Click here to Register!
Forgot Password
3.

Which combination of protons, neutrons, and electrons is correct for the 59Ni isotope?

answer
The answers and solutions to practice problems are available to registered users only. Click here to Register!
Forgot Password
4.

How many electrons are in the O2- ion?

answer
The answers and solutions to practice problems are available to registered users only. Click here to Register!
Forgot Password
5.

Complete the following table using the periodic table of elements. Add the specific isotope with the charge where needed.