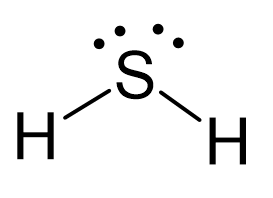 Sulfur is the central atom:

There are 6 + 2 = 8 electrons, and 4 of them are used to make 2 bonds. The remaining four electrons go to the sulfur:

The central atom has a steric number of 4 – two atoms and two lone pairs. The electron geometry, therefore, is tetrahedral, and the molecular geometry is bent.

There is a debate that the sulfur is sp2-hybridized and the lone pairs are in p orbitals and angles are close to 90o (92o). This contradicts the VSEPR theory, and your final reference should be your instructor.